Nutcrackers Around the World

Nutcrackers Around the World 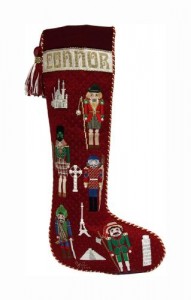 We were so pleased to become grandparents when my daughter gave birth to her son Connor. But it takes a bit of time to get to know the child and to discover what he is like, so it is only now that I feel I can stitch a stocking for him (2002).

After all, as I remind my students, a Christmas stocking lasts a lifetime, and the child will only be a baby for a short time. So I look for something that will go with him throughout his life.

Last Christmas we took him to see The Nutcracker at the ballet. He loved it (after much preparation by his mother). Our grandson is “all boy“ and loves rough and tumble and battles so he especially appreciated the sword fight between the Nutcracker and the mice.

Connor is also a combination of many nationalities—Irish and Italian in a big way, and to a lesser extent, German and French, so I depicted those ethnic groups in their native dress. He attends a bilingual pre-school and is studying Spanish (since he lives in Texas) and so I added a Mexican Nutcracker. Connor, although only 4, has already visited Mexico and France; we hope we take him to many other faraway lands in the years to come.

Each nutcracker holds a weapon (well, the French one has a paint brush—much more appropriate) since Connor is a big fan of battles and weapons, much to my dismay. But these are only ceremonial weapons—parade weapons.

I added some significant historic buildings from the countries depicted on the stocking, just for interest, and to remind him of what he saw. 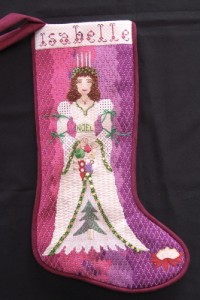 The Queen of Christmas is dressed for that special day. In her hair she wears a tiara of holly topped with candles; these evoke St. Lucia, a Christmas tradition in Sweden and Italy. Her gown is a glowing white interpreted in the loveliest silken threads and embellished with metallic threads and beads.

Her underskirt reveals a quilted petticoat which displays a bedecked Christmas tree. Ornaments embellish the hem of the petticoat. The outer skirt is edged with a wide beautiful braid of red, green and gold. In her hands she gathers some ornaments, and at her feet is her jeweled crown. Her cummerbund is Japanese gold couched to say ‘Noel.’

The back ground is a shiny flat stitch which shades from ruby red to royal purple—a joy to stitch.

This design may be worked as a Christmas Stocking, or framed as a oblong piece. It would make a perfect stocking for a beloved daughter or granddaughter—or perhaps for yourself. Who is the Queen of Christmas in your family? 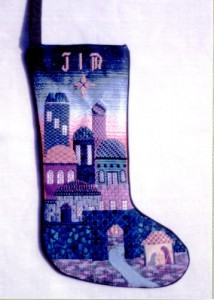 It’s close to midnight and the birth of Mary’s child is imminent. As the holy couple draws near to the tiny town of Bethlehem the hamlet sleeps in the light of one amazing star, and its gleaming rays bathe the town in celestial glow. But there is no room for them in the town so they take refuge outside the walls of the town and the blessed miracle occurs.

Stitch your own little town of Bethlehem, choosing either the mystical blues and violets of the nighttime sky. The sky will reflect the colors of waning daylight ranging from peaches and pinks to the deep indigo of the evening sky—all lit by one wonderful star.

O Little Town may be finished as a medium sized Christmas Stocking approximately 16″ x 10″ or may be framed to hang on the wall. Or . . . the nativity could be eliminated to create a Jerusalem scene for Jewish stitchers.