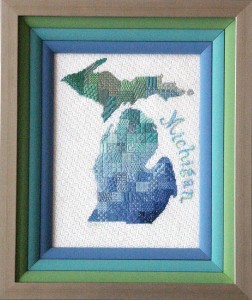 Our chapter yearly has an event in July, originally entitled Christmas in July but now known as Donna’s Day, in honor of Donna Groves, a well loved member who has passed away.  The chairman wanted to do my postcard class but decided it was too much for our one day format so I created a special Postcard from Michigan which was inspired by a quilted banner that also depicted the counties.

Michigan, and many other of the states in the old Northwest Territory, was surveyed along grid lines and most all counties and townships are squares or at least have boundaries which are straight lines and right angles.  Looking at a county map I was inspired to stitch my state in the style that Genny Morrow devised in her early piece called Nova.  Although I had never taken any of her classes I was intrigued by the challenge, and so Michigan Mosaic was developed.

Please be aware that I took great geographical/artistic liberties with the outline of the state, particularly in the placement of the Upper Peninsula.  It has been shifted at least 7° to the east, in order to get it on a reasonably sized canvas.

Michigan Mosaic is worked in 24 colors of floss and 4 metallics.  There are 83 counties and I used 22 different stitches  for the counties, and repeated them, but many have been reversed or mirror imaged.  All the stitches are on the diagonal for ease of fitting them together.  The students are free to choose a background stitch.  The word Michigan is worked in chain stitch

I would like to thank the framers of the Northwest Ordinance of 1803 for formatting the state with conveniently square counties, for the most part, or at least adhering to right angles for county boundaries—except, of course, where the lakes dictated otherwise.  And also, credit goes to Indian Agent Henry Rowe Schoolcraft for naming the counties.  Sometimes he invented names that he thought sounded “Indian.”

Thanks also to Genny Morrow for the original inspiration, and to Pat Timpanaro who has expanded on the idea, and to Debbie Stiehler, who has also taken this format to new highs.  And perhaps, originally, this is also a tribute to Gustav Klimt, the artist who kind of works in mosaic fashion.

Kits for Michigan Mosaic are available at the following shops: 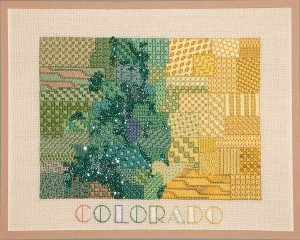 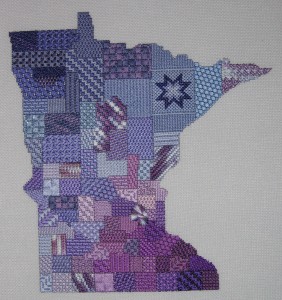 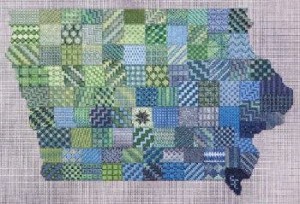 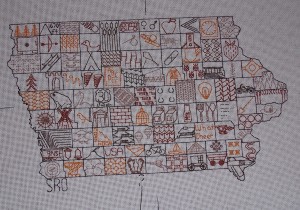