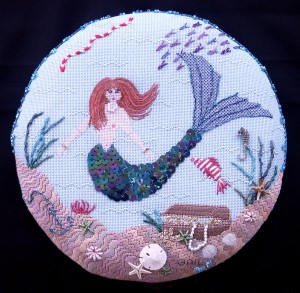 Mermaids exist in the fantasy  of man’s imagination—half beautiful woman, half ephemeral sea being.  And if mankind evolved from the ancient sea creatures then perhaps deep in our genes lies the longing to return to that early environment.

But my Siren has become fascinated with more terrestrial delights.  She has discovered a treasure chest and has helped herself to its contents: a string of pearls, golden dubloons, and beads for her wrists and ears.

She is surrounded by inquisitive sea creatures, some of them embroidered and some quite real.  Sea stars and sand dollars, sea urchins and anemones,  a tiny sea horse, a school of darting fish, even a sea snake come to investigate. The sea floor undulates with the waves that have formed it, the water weeds sway with the current.  Even her Titian tresses float in the movement of the water.

Sirena is mounted on a velvet box embossed with a wave design that echoes the water.  We learned to emboss and construct the box in a class with Caela Tyler, but the top’s design is my own.