Flowers for Maura and Marc 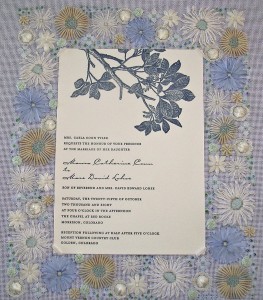 This was the year for weddings. My daughter was married in April, and not too much later I received an invitation to the wedding of Maura Conn, the daughter of my colleague Caela Conn Tyler. Caela had already begun an embroidered project for Cheryl, so I felt I should reciprocate in kind and do a handmade gift for Maura.

I recalled that many years ago I had made an embroidered picture frame for some friends who were celebrating their 25th anniversary. That piece was a white and silver interpretation of other flower designs I had created some 20 years ago. I resurrected that design idea and drew my colors from Maura & Marc’s invitation. I collected some interesting threads in a variety of textures, mostly concentrating on pale blues, but interspersing some whites and even some ecrus. I borrowed some techniques from Brazilian embroidery, but mainly relied on standard embroidery stitches and even a canvaswork stitch. All is light and airy…and round.

The frame has tiny needlewoven bars that hold the invitation in place; however the invitation is easily removed and may be replaced by a photo, as the young couple prefers.