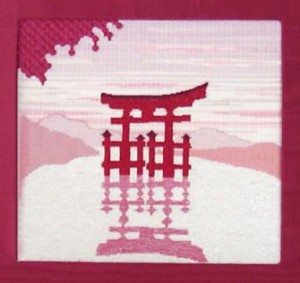 Peaceful and serene, the famous Floating Torii, (a Japanese gate) at Myajima is interpreted in the loveliest silks and metal threads in a gorgeious garnet color scheme which ranges from the palest pinks to a deep true garnet.

The Torii itself first commands our attention as it is worked in French Flat Silk and Krienik Braid in a beautiful flat stitch which shows off the properties of each thread. The water is at high tide so the entire Torii is reflected in the lake beneath, by the clever use of the Gobelin Weave Stitch.

The mountains recede into the distance. These are interpreted by the choice of appropriate stitches, texture, and color value. Most spectacular, after the Torii itself, is the sky which is composed of a variety of tones and hues to depict the rising sun.