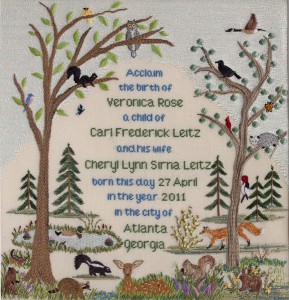 Historically I have made birth samplers for my children and grandchildren. The ones I have made for the grandchildren are all original designs by me. So it was time to do the sampler for our youngest grandchild, who is now three years old.. I had originally thought about a circlet of flowers. but then my daughter decided to decorate Veronica’s room in a woodland scene which she has stenciled and then painted on the walls. I was inspired by this project, and changed the sampler to a coordinating scene of woodland animals.

Two major trees embrace the birth information. I then added typical animals found in our neighborhoods. My daughter’s backyard is quite wooded and attracts a lot of wildlife, and these animals were the inspiration.

All the animals were drawn by me, although I did refer to bird and mammal books to make sure I got the details correct. I continued to add foliage and flowers that I thought were appropriate to the woods around Atlanta and Michigan. Some of the flowers are readily identifiable such as black-eyed susans and forget-me-nots. Others are pure fantasy. In the foreground, to the right of the fawn are some wildflowers called veronicas, which I thought appropriate to this sampler.

The fawn itself took me about a week to complete. There are at least a dozen colors of thread in that animal alone. Each animal was a challenge, and almost all of them have several layers of stitching, and include many values of thread.

It is my hope that this piece will become a valued family heirloom.