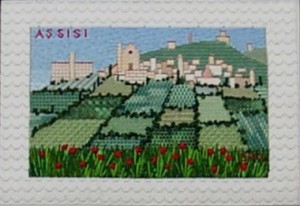 The second in my series of Postcards from Paradise, Assisi is a small town in Italy, about half way between Florence of Rome. It is the home of St. Francis and of St. Claire, both founders of religious orders during the medieval times. It is also the source of Assisi embroidery and one can find the women of the town relaxing in their doorways, chatting with neighbors, while working small pieces of the embroideries for the tourist trade.

Assisi glimmers on the hills of Tuscany, its ochre buildings and red tile roofs reflecting the warm rays of the sun. From a distance the rich valley is a patchwork of well tended fields which yield forth the bounty of the area: sunny olive oils, and rich Chianti wines. In the foreground I have chosen to include the cheerful poppy which is found throughout the region and brightens the landscape.

In the town one can see the Cathedral of St. Francis with its campanile, and further to the left the monastery for the Franciscan friars. More hidden among the other buildings of the town is the Basilica of Santa Chiara (St. Claire). The town is almost mystical in the distance, beckoning one to come and further explore its enchantments. 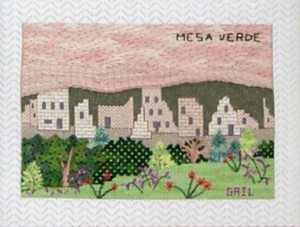 Mesa Verde is third in a series of my small designs entitled Postcards from Paradise. Mesa Verde, in the southernmost part of Colorado is one of the great American archeological sites; it is a rui, which gives us insight into the life of the ancestral native Americans. They built their homes into the cliffsides, along the canyons of raging rivers, but they were safe from the elements and marauding neighbors, the food supply was abundant, and they seemed to have the time to express their creativity in wonderful masonry, and in their cave art.

My design gives us a little peek at the past and how the ancient ones lived. Viewed from across the canyon it is a ghostly reminder of an earlier time. 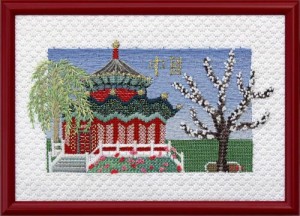 On a recent trip to China I was intrigued by this small pavilion which is located in the Summer Palace grounds. Yes, other places were grander and more elaborate but this place was so charming. I resolved to add it to my series of small needlework designs called Postcards from Paradise.

The Pavilion of the Eternal Spring is elaborately painted with characteristic Chinese patterns. It is surrounded by beautiful gardens in full bloom. In my composition I have included two of the trees that were so ubiquitous and so eye-catching during our visit: the willow wearing its spring green leaves, and the plum trees laden in showy white blossoms. We were fortunate to visit this attraction on a rare sunny day with a glorious blue sky. 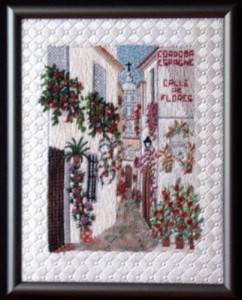 Still another Postcard from Paradise—this time it is Cordoba Spain, most specifically the wonderful Avenue of Flowers. The ancient white homes line a winding, twisting lane which is totally bedecked with fabulous flowers. They spring from pots, hang from window boxes and balconies and tumble from window sills. It is a glorious sight. When one reaches the end of this little lane you turn and see the wonderful La Mezquita, a one time mosque turned into a cathedral.

Spain, more specifically Andalucia, is full of fabulous sights such as the Alhambra but La Mezquita and the Calle de Flores was the one I most remember. It is obviously there to entice the tourists with its beauty but most of the residents profited little from making their homes and their lane so glorious.

Lesser known than the Alhambra La Mezquita was a mosque in the Mooorish era and is held up on the inside with, as they say, a “forest of columns.” It is truly an amazing place. And just when you think it has revealed all its surprises you become aware that inside of the old mosque is a Catholic cathedral. Thank goodness the early Christians had the good sense not to destroy the mosque.

Fourth in my series entitled Postcards from Paradise is Galapagos and recalls our journey to those far flung islands in the South Pacific. The islands are most famous for the visits of Charles Darwin which inspired him to formulate his theory of evolution. Now the travelers go to view the animals which were so cut off from civilization that they do not fear humans. The fortunate visitors have the privilege of very close encounters with wild life.

The images I chose for my “postcard” are the ubiquitous lava and prickly pear cactuses, the sparse foliage, and especially the animals. We were particularly fond of the sea lions and the blue footed boobies. Other animals one encounters at every turn are the giant tortoise, the iguana, and such a plethora of bird species as to bring wonderment to all. 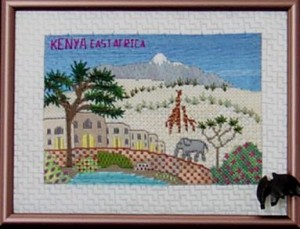 Here is another in my series Postcards from Paradise. This time our visit was to Kenya in East Africa and my design depicts the Maasai Mara, that vast ocean of grass along the border of Tanzania and the Serengeti.

I have chosen the view is from the pool deck of our hotel. From here we could see the vast sweeping plain of the Mara, laden with animals of many species. I have depicted only giraffes and elephants but we could also see herds of zebra and gazelle, wart hogs and cape buffalo. Less visible were the predators; it behooves them to hide and be secretive.

Here and there one can see the candelabra tree and the acacia, many hiding beautiful birds who filled the expanse with their song.

Our rooms were shaped like Maasai huts. Inside the hotel walls all was bedecked with African flowers. Interspersed among the people in the deck chairs were rock hyrax—an animal slightly larger than a cat and related to the elephant; they availed themselves of the sun and often the chairs—and the safety of the compound. But one night a leopard came to get one for her dinner.

Some artistic license has been taken in this composition for in the background one sees Mt. Kenya, but in truth it is hundreds of miles to the north and not visible from this vantage. But it was so a part of our Kenyan experience that I couldn’t leave it out. 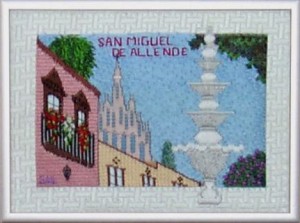 Another Postcard from Paradise; this time it is San Miguel de Allende, a charming town in central Mexico. This town northwest of Mexico City is a spot attractive to Americans and Canadians; those who can get away from the northern climes spend time there to partake in its language school, its art classes, and the beauty of the countryside. San Miguel is famous for its art and wonderful Mexican made furnishings, and for its true Mexican cuisine.

I loved its ubiquitous fountains, and chose to depict one particularly grand example in my design. Also visible is the tower of the town’s church. It’s designer had seen postcards of the great Gothic cathedrals of Europe and was determined that San Miguel would have such a church. He daily drew his plans in the earth so the workers would know what to do.

San Miguel has charming cupolas all about town, and radiant flowers are everywhere. 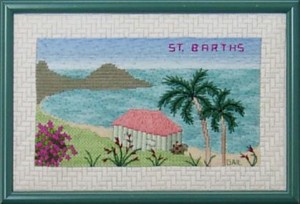 This was the first in what has become a series of small designs preserving in embroidery some of our favorite holiday destinations.

It is very French, with all that that entails. The people speak French, except for some small settlements that still speak an ancient Breton dialect. The shopping is very upscale and the clothes all seem very tiny. The restaurants are exquisite, combining the best of the French culinary tradition with some added grace notes from the Caribbean. Even the “dives” have great food! Many restaurants also feature fabulous views of the ocean for added dining pleasure. Great French wines and French cheeses are quite reasonably priced throughout the island.

The beaches are lovely, wide and sandy, although on the Atlantic side the surf can be a bit daunting. Many of the beach-goers sun bathe topless, with little regard for the burning rays of the sun.

My postcard features one of the characteristic houses one finds on St. Barths. It overlooks a serene bay, with small mountains in the distance. Riotous bougainvillea look over the house, as do two windswept palm trees. For the most part, unless well tended by humans the vegetation is sparse, as this is a desert island and water is a precious resource.

Consequently it is sunny most of the time, and always enchanting. 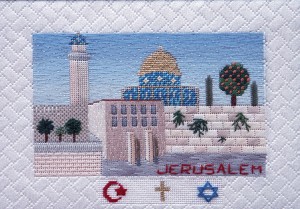 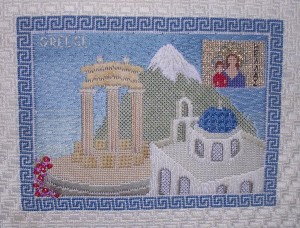