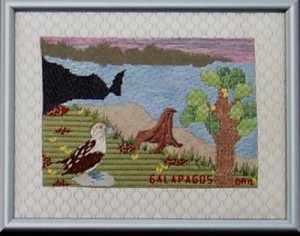 Fourth in my series entitled Postcards from Paradise is Galapagos and recalls our journey to those far flung islands in the South Pacific. The islands are most famous for the visits of Charles Darwin which inspired him to formulate his theory of evolution. Now the travelers go to view the animals which were so cut off from civilization that they do not fear humans. The fortunate visitors have the privilege of very close encounters with wild life.

The images I chose for my “postcard” are the ubiquitous lava and prickly pear cactuses, the sparse foliage, and especially the animals. We were particularly fond of the sea lions and the blue footed boobies. Other animals one encounters at every turn are the giant tortoise, the iguana, and such a plethora of bird species as to bring wonderment to all.